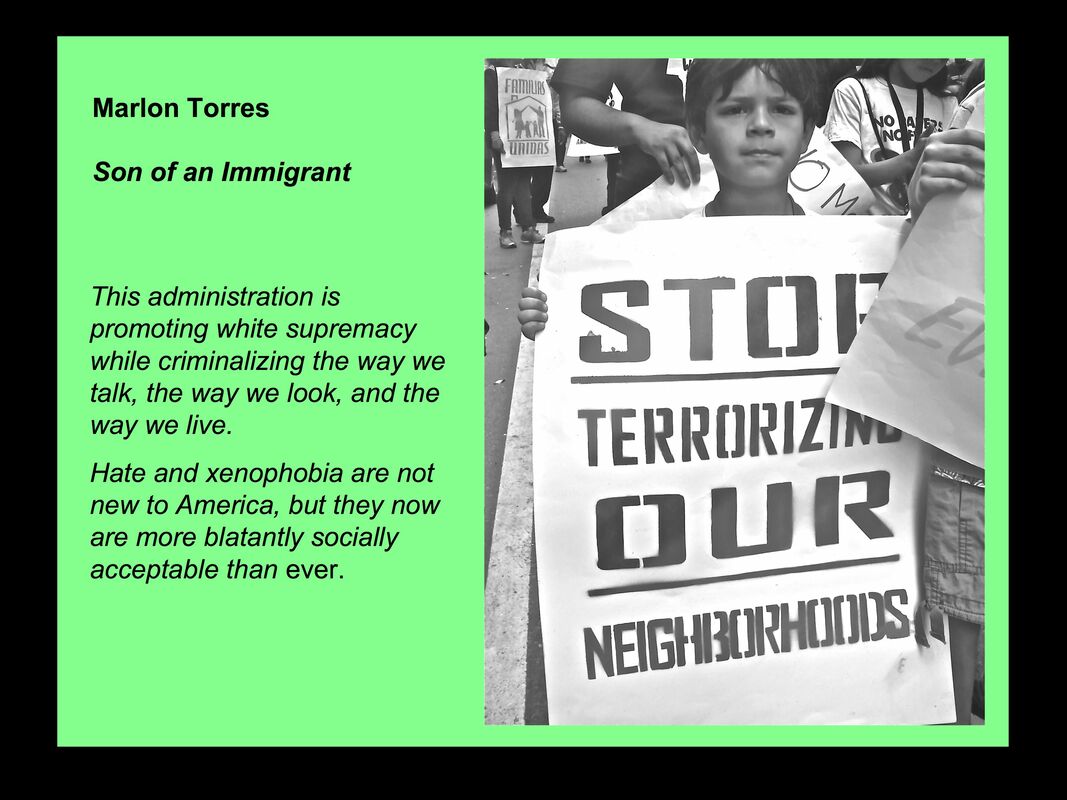 Son of an Immigrant

My name is Marlon Torres and I am the son of courageous Mexican immigrants who crossed the border. My parents immigrated to the United States chasing the American Dream. My father grew up in Guadalajara City. He was a homeless teenager and shined shoes to survive. He lived on the streets and relied on the kindness of strangers.

For my father, immigrating to the United States was a necessity. His choice was to stay poor and homeless or leave everything for the potential of a better opportunity. My mother was a teenager when she decided to migrate. She grew up in Puerto Vallarta and worked multiple service jobs.  She immigrated because she had limited opportunities, compared to working in the United States. She wanted a better life for herself, which was something she believed, could only be achieved in the United States.

My parents American Dream meant having economic opportunities to better themselves. My parents met and were married in Los Angeles, California. They were very intentional about only having 2 children, my brother and I, because a family of this size was all they could afford. My parents had jobs and worked all the time, but we still grew up poor.

I grew up in a very humble and modest household; we couldn’t afford to eat out, lived in a multi-family home and shopped at local swap-meets.

Today, my parents continue to work hard to pay their mortgage and live a comfortable life, achieving their dream. My parents believed in their American Dream and they took risks because they believed they could provide a better quality of life for our family. Today, there are several caravans of migrant refugees of women, children and families headed to the United States/Mexico border, escaping war, violence, and persecution.

They are threatened with family separation and incarceration at the border. I recognize their humanity and hear their stories; I can’t help but feel a connection, like they are my family. Migrants in the caravan are risking everything for the American Dream just like my parents did.

I see myself in those kids, I see my mother and father in those parents, I see their hope for a better life and for their American Dream. This administration has not only put a target on the caravan, but it has placed a target on all Latinxs.

This administration is promoting white supremacy while criminalizing the way we talk, the way we look, and the way we live. Hate and xenophobia are not new to America, but they now are more blatantly socially acceptable than ever.

The president recently expressed the idea of issuing an Executive Order challenging the Fourteenth Amendment of the United States Constitution and removing birthright citizenship. This reaffirms the administration’s agenda; it’s not about politics, it’s ethnic cleansing. The administration only wants people in our America who look like them, regardless of their immigration status. That means they don’t want me or my people.

I am grateful for the strong work ethic, resilience, and passion my parents instilled in me. My parents don’t want me to survive in this world, they want me to thrive. I thrive by working towards creating change and advocating for my community. I decided to move from the Pacific Northwest to Louisiana to fight against immigrant detention and inhumane conditions.

Through my work I am able to dialogue with undocumented people detained in rural detention centers across the Deep South. I feel privileged and honored serving some of the most vulnerable people. I listen intently as they share their most intimate details of their lives. They share stories of their journey to the United States, their American Dream, and life in detention. I document important information and facts which can help potentially sue ICE and the Department of Homeland Security to dismantle a system that is destroying my community.

I hope my work will dismantle mass incarceration and abolish detention centers. The work is difficult and thriving means I make time for self-care, recharging my mind, heart and spirit, and fill my cup with compassion and hope. There is no way we can combat the persecution on undocumented folks if we do not take care of ourselves, cultivate compassion in our communities, and create hope for a better future.