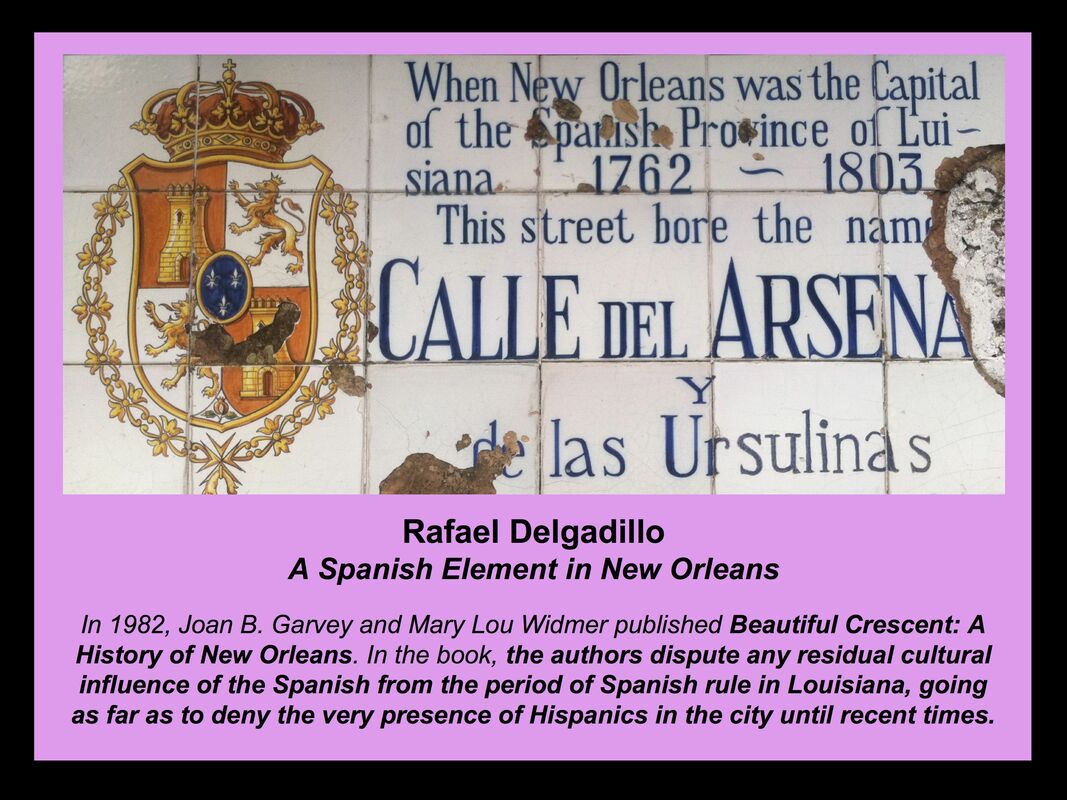 A Spanish Element in New Orleans

In 1982, Joan B. Garvey and Mary Lou Widmer published Beautiful Crescent: A History of New Orleans. In the book, the authors dispute any residual cultural influence of the Spanish from the period of Spanish rule in Louisiana, going as far as to deny the very presence of Hispanics in the city until recent times.

An excerpt from the fourth chapter, entitled “The Spanish Period,” reads: The city of New Orleans was never Spanish, in its customs, culture, or language. Throughout the period of Spanish domination, it remained tenaciously French... There was never a Spanish newspaper printed in the city. The people of New Orleans never became Spanish-speaking people until the Cubans began arriving in the 1960s.

Garvey and Widmer’s rejection of the cultural legacy of the Spanish colonial period is typical of much of the popular historiography of New Orleans. More thorough research reveals a host of residual Spanish imprint on Louisiana, including influence on local language in common Louisiana terms such as lagniappe.

The Spanish also introduced coartacion to Louisiana. This practice allowed slaves to purchase their own freedom and had an impact on the development of the free black population in New Orleans.

There were also the Spanish speaking immigrants from the Canary Islands who settled throughout Southeast Louisiana beginning in 1778. It is estimated that about two thousand Canary Islanders made it to Louisiana. Their descendants are referred to as Isleños, and most of them live in what is now St. Bernard Parish. This distinct, but dwindling, ethnic group spoke a Creole dialect of Spanish well into the late twentieth century.

Garvey and Widmer’s denial of Spanish newspapers in the city, however, is an inexcusable error. In 2008, twenty six years after the publication of Beautiful Crescent, Latino journalists and academics from around the nation gathered in New Orleans with local Latino civic leaders for a nationwide multimedia project entitled Voices for Justice: The Enduring Legacy of the Latino Press in the U.S.

The project was put together in celebration of the bicentennial of El Misisipi, the first Spanish newspaper in the United States, which began publishing in New Orleans in September of 1808. Indeed, the Spanish language press may be the most enduring legacy of Hispanic presence in the city. Since the first publication of El Misisipi, New Orleans has had at least one Spanish newspaper published in every decade up to the present day.

Though Garvey and Widmer were not professional historians their book has become a popular read on New Orleans’ history. The New Orleans Taxicab Bureau, which is in charge of licensing tour guides in the city, has in the past been known to recommend the book to potential tour guides in the city’s most historic neighborhoods. Yet, information on the Spanish press in New Orleans was easily available to Garvey and Widmer.

In 1951, Raymond MacCurdy published A History and Bibliography of Spanish-Language Newspapers and Magazines in Louisiana, 1808-1949 for the University of New Mexico’s Publications Series in which MacCurdy identified over thirty Spanish language publications printed in New Orleans throughout the nineteenth century.

One of the publications mentioned by MacCurdy was a weekly newspaper entitled El Moro de Paz. This paper, which was issued weekly on Sundays, began running in 1888. It sought “the advancement of the commercial, agricultural, and manufacturing interests of Louisiana and Spanish-America.” Its intended audience was “the Spanish speaking people of New Orleans and in the Latin-American republics adjacent to the United States.”

Today, the New Orleans Public Library has partial copies of four editions from February of 1889 and Tulane University has a surviving original from March 17, 1889. New Orleans’ geographic location as a port near the Gulf of Mexico meant that commercial relationships with other port cities in Latin America were inevitable and the city was an active participant in a transnational, commercial and cultural circuit in the Gulf of Mexico and the Caribbean. Although other ethnic groups in New Orleans were more heavily involved in shipping and commerce, Hispanics had the advantage, through print, to directly communicate with other Hispanic populations throughout the Latin world.

The Spanish press allowed Hispanics in New Orleans to maintain an open and consistent line of communication with Hispanics in Latin America. El Moro de Paz enhanced this trend and generated a conduit for trans-Gulf-Caribbean-Atlantic commercial and intellectual exchange.

In fact, Lafcadio Hearn, who chronicled daily life in New Orleans during his time in the city from 1877 to 1888, became well acquainted with Hispanics that were living in New Orleans, but found that they were a relatively small group. He once wrote, “Perhaps there is no class of citizens of New Orleans - the Marseilles of the western world - about whom so little is generally known as our Spanish element.”

Hearn claimed that about three hundred families from this distinct group of immigrants formed a Benevolent Society. The community was loosely organized and members of the society “pursued special callings,” formed “special industrial organizations,” and had their own social institutions, priests, doctors, and lawyers.

Hearn observed that the Spanish settled in “less frequented parts of the city” and were “less publicly visible” than other immigrant groups. Like many other writers of the Victorian era, Hearn ascribed a type for members of this “element”: A great number of these men are in business on their own account... and the trade generally followed is tobacco manufacturing... So soon a young man lies by a certain sum, he marries –usually either a Creole of the poorer class or a European woman, Irish, English, or German– and thus it happens that almost every one of our Spaniards above thirty is the head of a large family.

José Antonio Fernandez de Trava, the founding editor of El Moro de Paz, was a prominent member of the Spanish immigrant community in New Orleans and he fit Hearn’s type in varying ways. The native Spaniard was a long time businessman in New Orleans with ties to the tobacco trade from his earliest days in the city. His second wife was a Creole woman, though not of the poorer class. With six children he certainly had a sizeable family. Yet, he did not strictly fit Hearn’s type. Later in life Fernandez de Trava became involved with international shipping firms and established himself as a member of the merchant class.

He was lauded for his ability to speak multiple languages and in 1884 he became the first professor of Spanish at the newly established Tulane University, becoming chair of the department soon thereafter. When he died in 1906, his obituary in the Daily Picayune was nearly the entire length of a column and it celebrated his accomplishments as an educator and as a businessman.

A closer look at the lives of individuals, such as Fernandez de Trava, may reveal insight into the experiences of Hispanics, both as individuals and also as a community in New Orleans. At the same time a better understanding of the development of the Hispanic community in New Orleans could reinforce, or perhaps helps to re-envision, the long-standing reputation of the Crescent City as a place of diversity and cross-cultural exchange.

In using El Moro de Paz to promote economic progress and industrial development in the region, Fernandez de Trava can be linked to other newspapermen of his day such as Henry Grady and Daniel Augustus Tompkins both of whom became known for promoting the New South: a topic whose historiography all too often excludes New Orleans.

Like his fellow New Orleanian and fellow publisher J.D.B. DeBow, Fernandez de Trava saw the city’s connections to Latin America as vehicles for Louisiana’s economic development after the Civil War. Publications like El Moro de Paz not only help us see the city’s role in the emergence of the New South, but also give us a transnational view of it as well.

In rediscovering New Orleans’s ties to Latin America, the role played by Louisiana’s colonial history, which began in 1699 with France’s founding of the territory, should not be overlooked. In 1762, the vast North American territory was ceded by the French to Spain in the secret Treaty of Fontainebleau. Delays, a lack of urgency, and a revolt meant that the Spanish would not establish full control over New Orleans until 1769. As a colony, Louisiana was financially unprofitable for both France and Spain.

During their tenure, the Spanish never tried to develop New Orleans into an economic and cultural center like Havana or Mexico City. but it would be erroneous to assume that the Spanish left no cultural legacy in New Orleans. The cultural transition that took place in New Orleans after the Spanish took over was not a drastic one. Spain, a Catholic country, maintained many of the same cultural, social, and legal customs practiced by the French-speaking Creoles of New Orleans, and the French language and French- Creole culture remained dominant in Louisiana throughout the Spanish colonial period.

This, combined with Louisiana’s deep cultural influences from Africans, and indigenous peoples, makes New Orleans’ social development more comparable to the societies of Latin America than with the cultural heritage of the British colonies.